His Holiness the Dalai Lama

Inspiration and guide of the FPMT & Root Institute for Wisdom Culture

His Holiness the 14th Dalai Lama, Tenzin Gyatso, is the spiritual leader of the Tibetan people.

His Holiness was born on 6 July 1935 in Taktser village in northeastern Tibet to a peasant family. His Holiness was recognized at the age of two as the reincarnation the 13th Dalai Lama and is an incarnation of Avalokitesvara, the Buddha of Compassion.

His Holiness began his monastic education at the age of six. At twenty three he passed his final examination with honours and was awarded the Geshe Lharampa degree, equivalent to a doctorate of Buddhist philosophy. His Holiness describes himself as a simple Buddhist monk.

In 1959, with the brutal suppression of the Tibetan national uprising by the Chinese, His Holiness was forced to escape to India. Since then he has been living in Dharamsala, the seat of the Tibetan Government in exile.

His Holiness has received over 84 awards, honorary doctorates and prizes in recognition of his message of peace, non-violence, inter-religious understanding, universal responsibility and compassion. Founder of the FPMT & Root Institute for Wisdom Culture

Lama Thubten Yeshe was born in Tibet in 1935. At the age of six, he entered Sera Monastic University in Tibet where he studied until 1959, when as Lama Yeshe himself has said, 'In that year the Chinese kindly told us that it was time to leave Tibet and meet the outside world.'

Lama Thubten Yeshe and Lama Thubten Zopa Rinpoche, together as teacher and disciple since their exile in India, met their first Western students in 1965. By 1971 they settled at Kopan, a small hamlet near Kathmandu in Nepal.

In 1974, the Lamas began touring and teaching in the West, which would eventually result in The Foundation for the Preservation of the Mahayana Tradition (FPMT).

In the early 1980s, Lama Yeshe inspired the establishment of Root Institute, and later visited to bless the land on which our centre was established.

Lama Yeshe died in 1984, his reincarnation Tenzin Osel Rinpoche was born to Spanish parents in 1985. In 1987 Osel first visited Root Institute as a small boy, and he has continued his connection by visiting us recent years. Spiritual Director of the FPMT & Root Institute for Wisdom Culture

Kyabje Lama Zopa Rinpoche was born in 1946 in Thami, in the Mount Everest region of Nepal, not far from Lawudo cave where his predecessor had meditated for the last 20 years of his life.

The Chinese occupation of Tibet in 1959 forced him to forsake Tibet for the safety of Bhutan. Rinpoche then went to the Tibetan refugee camp in West Bengal, India, where he met Lama Yeshe, who became his closest teacher. The Lamas went to Nepal in 1967, and over the next few years built Kopan and Lawudo Monasteries.

In 1971 Lama Zopa Rinpoche gave the first of his famous annual lam-rim retreat courses, which continue at Kopan to this day. When Lama Yeshe passed away in 1984, Lama Zopa Rinpoche became the spiritual head of the FPMT, which has continued to flourish under his peerless leadership.

Rinpoche's published teachings include Wisdom Energy (with Lama Yeshe), Transforming Problems, and a number of transcripts and practice booklets.

These Western disciples invited the Lamas to give teachings in their own countries, where contact was made with many more people and from there the centres of the "Foundation for the Preservation of the Mahayana Tradition", known as the FPMT, began to grow. There are now over 1700 centres worldwide.

Today, Lama Zopa Rinpoche is the Spiritual Director of these centres and spends his life travelling the world to give teachings, and to spread the Dharma of wisdom, love, compassion and universal responsibility. 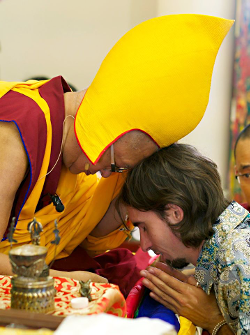 Tenzin Osel Hita was born on February 12th 1985 in Bubion, Spain, to Maria Torres and Paco Hita. His parents had been students of Lama Thubten Yeshe and in 1978 had established a Retreat Centre at Bubion near Granada. His Holiness the Dalai Lama had named the centre Osel Ling, meaning 'Place of Clear Light' while visiting in 1982.

From the time of Lama Yeshe's passing in 1984, Lama Zopa Rinpoche had been engaged in the search for his reincarnation. Paco and Maria themselves had four other children, and had noticed that Osel was unlike the others. His birth had been remarkably quick and painless, and he was very peaceful.

In 1985 Paco and Maria took Osel to Switzerland for the Dalai Lama's Kalachakra initiation, and later went to Germany for an annual FPMT meeting at Arya Tara Institute. The meeting was presided over by Lama Zopa Rinpoche. This was the first time that he had seen the child in person, and later in the meeting he remarked cryptically that 'Lama (Yeshe) is very close to us at this moment. He might even be in the room with us.' Nobody took this to mean baby Osel.

A few months later when Lama Zopa was giving teachings at Osel Ling, he asked Maria many questions about the young Osel, and without explaining what he was thinking, gave instructions for proper care of the child. In the meantime, he continued his search for Lama Yeshe's incarnation, finishing with a list of ten possibilities. He then sent this list to His Holiness the Dalai Lama, who finally confirmed that Osel was the most likely candidate.

In May 1986 at Lama Zopa's request, Maria brought Osel to New Delhi to meet His Holiness. He was to undergo the traditional tests performed to check if a child is indeed the reincarnation of a Lama. His Holiness simply told Maria that Osel would give further evidence of his identity as he got older. Lama Zopa then travelled to Dharamsala with Osel and Maria to Tushita Meditation Centre which had been one of Lama Yeshe's favourite places to stay.

Once there, according to tradition, Lama Zopa tested Osel's ability to recognise Lama Yeshe's possessions, and when he passed all of the tests given, it was officially declared that Osel was indeed the reincarnation of Lama Yeshe.