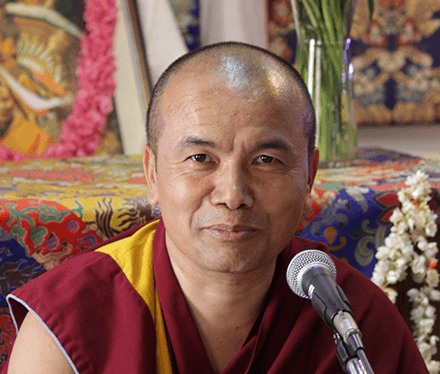 Ven Geshe Dorji Damdul is presently Director at Tibet House, New Delhi, Cultural Centre of His Holiness the Dalai Lama. In 1988, Geshe Dorji Damdul joined the Institute of Buddhist Dialectics, Dharamsala for formal studies in Buddhist logic, philosophy and epistemology. After 15 years of study in Buddhist philosophy he finished his Geshe Lharampa Degree (Ph.D.) in 2002 from Drepung Loseling Monastic University. He joined Gyudmed Tantric College for a year for Tantric studies.

Geshe Dorji Damdul was appointed as the Director of Tibet House, Cultural Center of H.H. the Dalai Lama, New Delhi in March 2011 and is currently the teacher and director there. Geshe la has taught and run the Nalnada Masters and Diploma Courses which are very popular structured courses attended by students from all over the world. While assigned with the responsibility of the Directorship of Tibet House, the Cultural Centre of H.H. the Dalai Lama, New Delhi, India, he also gives regular lectures in Tibet House and many other places like Universities and Institutes. He also travels widely within India and abroad, like Mumbai, USA, U.K., and Singapore to teach Buddhist philosophy, psychology, logic and practice.

As assigned by the Office of H.H. the Dalai Lama, he visited the US in 2008 to work with Prof. Paul Ekman, a world renowned Psychologist, one of the pioneers of the science of micro-facial expressions, on H.H. the Dalai Lama’s book “Emotional Awareness” which is co-authored by Dr. Paul Ekman of the University of California Medical School. His Holiness the Dalai Lama also assigned him with a text book project. He was one of the chief editors for the text book on Buddhist Science and Philosophy. This text book is to be used for Centers and Institutes all over the world to study more thoroughly on Buddhist philosophy, metaphysics, epistemology, and science.

He was affiliated with Drepung Loseling Library where he served as the editor of Dreloma Magazine for eight years from 1994-2001. Prior to that he was the editor and contributor for 5 years for “Lhaksam Tsekpa” – a journal of comparative studies, the theme of which is on Modern Science and philosophy, published by the Institute of Buddhist Studies.

He wrote number of important papers for National and International Conferences held in Delhi University, and so forth. The papers constitute topics such as “The Paradox of Brain and Mind” and “The Ultimate Reality According to Arya Nagarjuna.”

In 2004 – 05, for two years, he was assigned as the Philosophy Lecturer for the Emory University Study Abroad Program which was being held in Dharamsala, India since 2001. Born in France in 1969, Ven. Olivier joined the Masters Program at Institute Lama Tzong Khapa in Italy from 1998 to 2005 under the guidance of Venerable Geshe Jampa Gyatso of Sera Jay Jhadrel Khamtsen and took ordination in June 98.

He his currently teaching the residential Basic Program at Munigyana Center in Sicily. Over his 23 years of ordination, Ven. Olivier has also been leading numerous retreats and weekend courses in FPMT centers in Europe and India.